The column headers are rendered multiple times during the scroll

In HT8, Handsontable has done a lot of improvement in the performance which is a major motivation for us to upgrade to the latest version. Thanks for the work.

After upgrading to HT9, when I measure the performance, I notice that the column header seems to be rendered multiple times.

In this example: Column “A” and “B” are the left fixed columns:

When I scroll vertically, in each onTableScroll, there are two major function triggered: 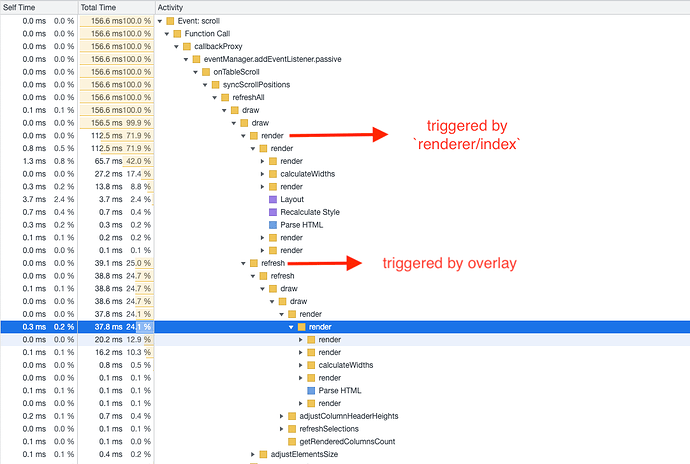 In our app, I placed the debugger in the appendColHeader and I noticed that:

I don’t totally understand how Handsontable rendering works. But, if the ‘overlays’ is supposed to render the column headers, why is the renderer/index also renderers them? I don’t see this overlay rendering in version 3.0.0.

This will adds about 20ms in each scroll rendering in our app. I am trying the squeeze the performance for each scroll render. Currently, after upgrade, it increase about 50ms comparing to our previous version 3.0.0

Btw, each column header is a DOM string, not a plain string.

If you think this might be something we did incorrectly in our app, let me know.

Thank you for this report. May I also ask you for a demo where this issue can be replicable?
We haven’t been reported any issues regarding performance drop in v9 (besides the use of the new formula engine) reported at https://github.com/handsontable/handsontable/issues/8118.

We have our tools that check the performance of a new version upon the release, and we did not see any bugger changes. It means that maybe your implementation settings are outside of the scope of our tests. A demo with your settings would help us a lot to investigate the solve the case.

Thanks for the quick response @aleksandra_budnik

Our table is very customized. So, it is kind of hard to provide a demo where the performance issue could be reproduced.

I think the bottleneck of performance is very much likely to happen on our side. I just want to check with you if above could an issue.

It might be the cause of Handsontable.
By customized, do you mean that you have a custom method for the scroll even ofafterGetColHeader` method? Because those two seem to be the first thing that came to my mind as the source of possible issues.